The $25 Million Building in Afghanistan Nobody Needed 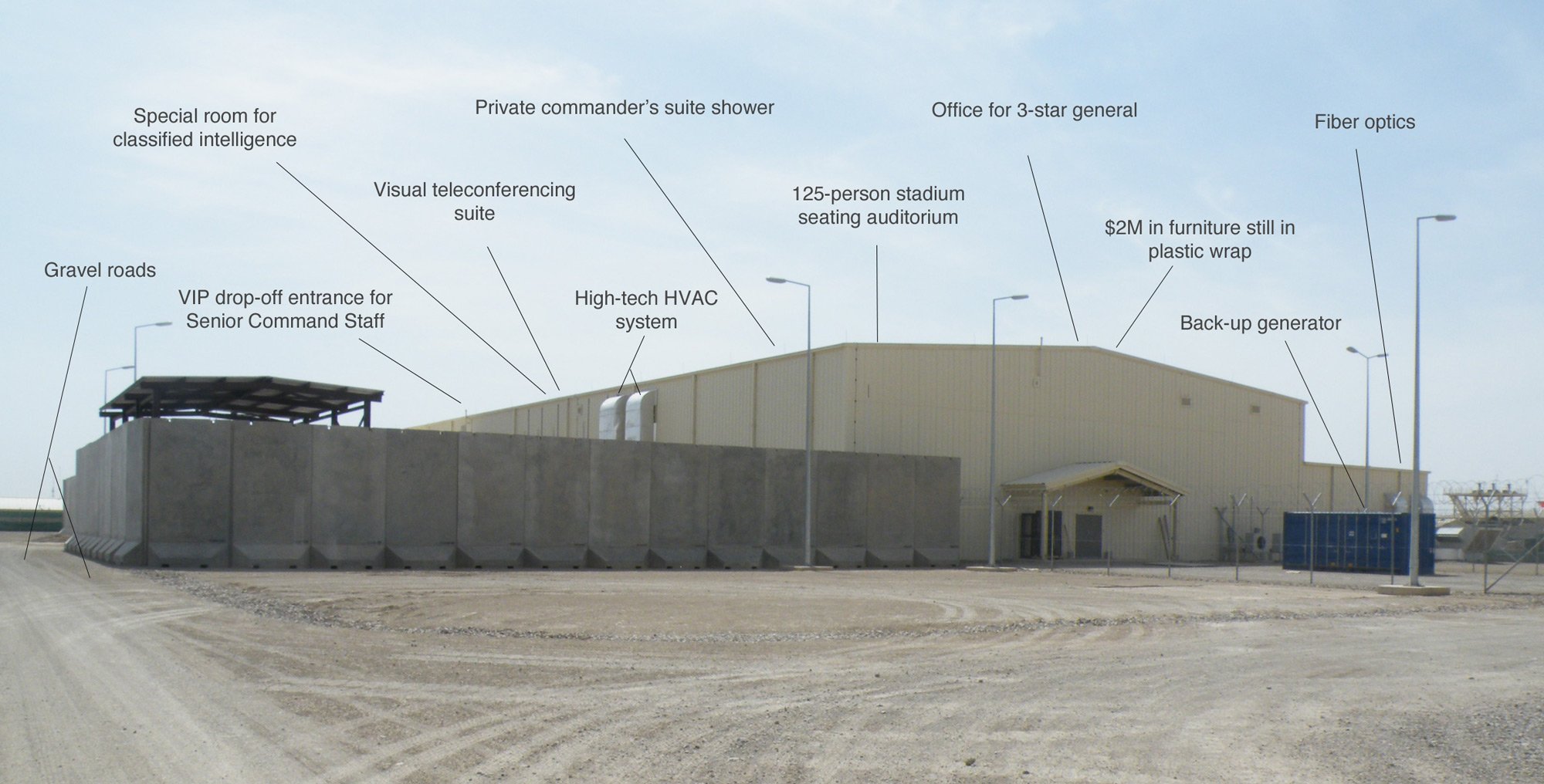 by Megan McCloskey and Vince Dixon
ProPublica, May 20, 2015

This is a story about how the U.S. military built a lavish headquarters in Afghanistan that wasn’t needed, wasn’t wanted and wasn’t ever used—at a cost to American taxpayers of at least $25 million.

From start to finish, this 64,000-square-foot mistake could easily have been avoided. Not one, not two, but three generals tried to kill it. And they were overruled, not because they were wrong, but seemingly because no one wanted to cancel a project Congress had already given them money to build.

In the process, the story of “64K” reveals a larger truth: Once wartime spending gets rolling there’s almost no stopping it. In Afghanistan, the reconstruction effort alone has cost $109 billion, with questionable results.

The 64K project was meant for troops due to flood the country during the temporary surge in 2010. But even under the most optimistic estimates, the project wouldn’t be completed until six months after those troops would start going home.

Along the way, the state-of-the-art building, plopped in Afghanistan’s Helmand province, nearly doubled in cost and became a running joke among Marines. The Pentagon could have halted construction at many points—64K made it through five military reviews over two years—but didn’t, saying it wanted the building just in case U.S. troops ended up staying. (They didn’t.)

The Pentagon brass chalked up their decisions on the project to the inherent uncertainty of executing America’s longest war and found no wrongdoing. To them, 64K’s beginning, middle and end “was prudent.”

The $25-million price tag is a conservative number. The military also built roads and major utilities for the base at a cost of more than $20 million, some of it for 64K.

Ultimately, this story is but one chapter in a very thick book that few read. The Special Inspector General for Afghanistan Reconstruction routinely documents jaw-dropping waste, but garners only fleeting attention. Just like the special inspector general for Iraq did with its own reports.

With 64K, SIGAR laid bare how this kind of waste happens and called out the players by name. The following timeline is based on the inspector general’s report, supporting documents and ProPublica interviews.

Loading data... Note: JavaScript needs to be enabled in your browser to view the rest of this story.
(Hover over chart to compare troop levels with 64K's growing budget)
TROOPS:
0
VS
BUDGET:
$0
TROOPS: 0
VS
BUDGET:
$0
Source: The U.S. Marine Corps and SIGAR
Graph shows construction costs for actual building and excludes $20.9 million spent on utilies and roads. Troop numbers show Marines in Afghanistan's Helmand Province, but includes a small fraction of troops from other provinces.

Here's How the Story Unfolded:

Loading data... Note: JavaScript needs to be enabled in your browser to view the rest of this story.

Clarification: Earlier photo captions for Lt. Gen Richard Mills and Lt. Gen. Peter Vangjel used their ranks at the time the events in the story took place, not their current ranks.