The data on this website is limited and is from 2009 to 2013. For complete data from 2013 onward please see the newest version »

How Industry Dollars Reach Your Doctors

EMD Serono, based in Rockland, Mass., is an affiliate of Merck KGaA of Darmstadt, Germany. The company and affiliates agreed to pay $44.3 million in May 2011 to resolve allegations of improper marketing of the MS drug Rebif.

The company removed payment information from its website in September 2014, after its Corporate Integrity Agreement with the U.S. Department of Health and Human Services inspector general expired the same month. Dollars for Docs includes payments through the end of 2013. 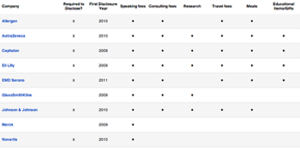 Drug companies have paid billions to the Department of Justice to resolve allegations of health care fraud. See some of the biggest settlements. 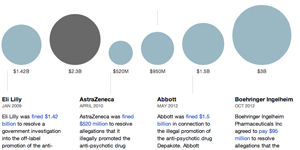